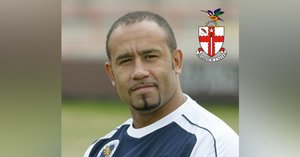 Past Player and Assistant Manager Takes The Top Job

Redditch United are excited to announce former Reds Captain Matt Clarke as their new Manager. Matt will take charge of training tonight, and will debut in the dugout for our final preseason game against Kettering Town on Saturday 12th September at home.

As a player, Clarke had spells with Wolves, West Brom and Halesowen Town as a youngster before heading to Kidderminster Harriers in a £10,000 move. After a season at Aggborough he left for Hereford United where he played around 150 games over four seasons before further moves took him to Telford United and Redditch Utd. Clarke also worked as Assistant Manager under Paul Smith in 2018.

Redditch United Chairman David Faulkner said "We are delighted to have Matt on board with us. It was essential for us to have someone at the helm who understands the Club and Matt's previous history, both as a player and Assistant Manager, gives him the understanding of what we need as a Club to be successful. This appointment isn't just mine, it has been made by a collection of people at the Club and it is one which I fully support. Matt has the full backing of us all and it is really important that he has support both from the Club, and the fans. His objective is to stabilise the team this year and enable us to push further in the future."

Matt's backroom staff will be announced in due course.

Season Tickets are still available at the reduced rate of £99