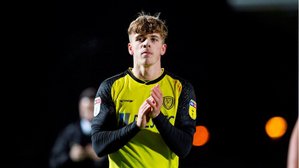 Defender and Burton Albion Academy graduate Ben Hart has agreed to join The Reds on loan. Hart signed a one-year professional deal at Burton in the summer of 2020, having made his first team debut in the 2019/20 season.

Hart has now made three first team appearances at Burton and has also gained experience in both the Southern and Northern Premier League with loan spells at Kidsgrove and our League rivals Tamworth.

Ben will go straight into the squad for our next game in the Red Recruitment Trophy away at Evesham United tomorrow (Saturday 19th December, 3pm Ko). Tickets for this game will be pay on the gate.