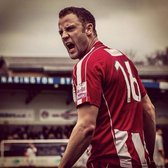 We are delighted to announce a second player has committed to the Wayne Spicer revolution, this time it is former Port Vale, Mansfield Town and Telford United hitman, Kyle Perry.

Perry who has scored goals at every club he has been at, boasts an impressive scoring record in the division, including a last-minute goal against Redditch last season. His nonleague football CV includes clubs such as Stafford Rangers, Altrincham and Tamworth, where he has shown his prolific instincts in front of goal. Following a meeting with Wayne Spicer, the forward was impressed with the club’s ambition, training regime and off field package. Perry had this to say upon committing to the club for the 2020-21 season:
“I’m delighted to get over the line as It is a club that has so much potential to push on in the leagues. After speaking to the gaffer throughout the Summer I knew it was something I was eager to be a part of. His enthusiasm and love for the game speaks volumes and it really is what sold me on and is what I am looking for at this stage in my career. I’m eager to get started now and I know we will be turning a few heads this season; I want to be a big part in establishing Redditch as a team you fear to play.”

First team manager, Spicer, was obviously delighted with his new addition, saying that:
“Firstly, I would like to welcome Kyle to the club, he’s a top player who can really help us move forward. He is a natural scorer and we are hoping to build a team that can help him hit the number of goals he should be getting.

I really like Kyle’s attitude too, his commitment to the club is linked with his desire to pass his knowledge on to some of the younger, less experienced players and help them to come through so the team can be as strong as possible. “

The prolific front man has committed himself to the club for the upcoming season and we would like you to join us in welcoming him to the club!