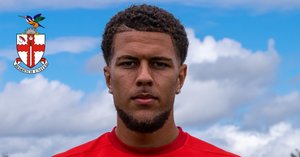 Redditch United are excited to announce the signing of Dan Sweeney.

Sweeney featured for the Reds during preseason before making the switch to Hednesford Town. He parted ways with Hednesford early last month and has now committed to the Reds after a range of offers from sides at Step 3 and above. Sweeney can play in attack or on the wing and his previous Clubs include Kidderminster Harriers and Solihull Moors.

Matt Clarke commented: I'm very happy to have added Sweeney to our squad who is going add further potency to to the attacking options. Everybody knows the ability that Dan has, now is the time for him to settle. If he can do this here I am certain he will have a big impact on our future this season."

Sweeney will go straight in to the side for tonights game at Bromsgrove Sporting which will be The Reds opener in the Red Recruitment Trophy. Tickets for the game can be purchased via the Sporting website or there are limited ticket available to pay on the gate.

In other squad news, we can confirm the departure of midfielders Kyle Copp and Matt Dodd. Redditch United have also parted company with 1st Team Coach Scott Goodwin. We would like to thank them all for their efforts during their time with Redditch United.

Sweeney will be in action at The Trico Vs local rivals Alvechurch on Monday 21st December (7:30 K0). Tickets for this game and our other home games on Boxing Day and New Years Day can be purchased via the club website.

GET YOUR TICKETS HERE NOW