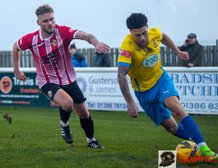 RED RECRUITMENT TROPHY | Look ahead to Monday’s game Against Alvechurch

The Red Recruitment Trophy continues to provide the festive football fix for us all over the festive period. After a late withdrawal of Worcester Raiders and the addition of Evesham, The Reds went to The Spiers & Hartwell Jubilee Stadium to try and pick up their first win in the inaugural competition yesterday.

The Reds suffered late heart-ache in their first game away at Bromsgrove on Tuesday evening after two late goals from Jason Cowley saw Bromsgrove take the spoils. Again late drama, which has added to the competition so far, was against The Reds, as they suffered an injury time equaliser from Evesham to level the game at 3-3.

Currently Bromsgrove top the table with Redditch and Evesham on a point each. Alvechurch will now open their Tournament late due to their game with Bromsgrove being postponed on Saturday and their original opener, which saw them ease comfortably past Worcester Raiders 5-0, was wiped after their withdrawal.

With games so thick and fast for all sides, supporters can expect to see some new faces and Managers utilising the use of five substitutions agreed for the Trophy. The competitive nature has certainly not take away from the competition with games still carrying the feisty edge which is inevitably going to increase as the rounds of matches reach the end of the competition.

Redditch Vs Alvechurch will be at a slightly earlier Kick Off time of 7:30. Online tickets will be available until midnight tonight and any remaining tickets will be able to be purchased at the gate (cash or card).

The bar and kitchen will be open with all Covid regulations in place. We will be offering a reduced menu in the bar and kitchen, the new Club shop will also be open so you can collect your last minute Christmas gifts.

The Reds will also be at home on Boxing Day and New Years Day. All Tickets can be purchased at the link below.