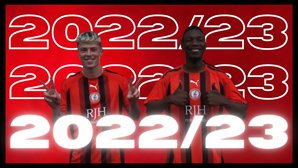 We're excited to announce a double striker signing for the upcoming campaign!

Nesbitt arrives from Bedworth United (step 4) and Mensah from AFC Gloucester (step 2). The latter had a short loan spell with us last season, he scored against Lowestoft in a 4-2 win before unfortunately injuring his back in the same game.

We heard from manager, Matt Clarke, to give his thoughts on his new forwards.

"I'm really pleased to get Nesbitt and Mensah over the line.
A few people have been panicking a bit about our lack of strikers, but we said from day one let’s just be patient and that's what we've done.

Bernard Mensah brings lots of qualities to the side. He’s scored goals at step 1/2 and brings a wealth of experience which will be really important for us. The fact that he came in for a month last season means he understands the demands we want. He’s had a bad 12 months with injuries and has fallen out of favour at Gloucester, but he comes here on a permanent basis, I expect him to be a huge addition for us.

Ryan Nesbitt comes to us after scoring 22 goals last season for 3 different clubs; Loughborough Dynamo, Bedworth United and Alvechurch. Ryan is a natural goalscorer, something we’ve not had in my time here. He’s proven lower down and we will give Ryan the platform to showcase his talents at step 3. Ryan probably feels he has a point to prove at step 3 and I’m sure he will be a fantastic addition for us. He’s come in looking very sharp in training. Welcome on board guys!"